In 1931, on a cold dark evening in Oxford, J.R.R. Tolkien gave a lecture on the art of language invention and the relation between myth and language to the Samuel Johnson Society at Pembroke College.

In 2016 Tolkien scholars Dimitra Fimi and Andrew Higgins came to Pembroke to give a talk on Tolkien’s essay, 85 years later, on the exact same location and date.

Earlier this year Dimitra and Andrew published the first ever critical study of the essay, reproducing it alongside a new essay and drafts from Tolkien’s manuscripts, accompanied by detailed editorial notes and introductory material.

The Q&A afterwards covered a range of topics, including the importance of music and reading aloud in Tolkien’s work; the  influence of other writers on his theories;  other invented languages such as Klingon and Dothraki; and whether Saruman would have invented Esperanto if he’d had a chance.

The conversation continued into the night, in true Oxford and Tolkien style, when we retired to the common room to discuss invented languages and mythology over wine and cheese.

There was also the opportunity for attendees to see letters written by Tolkien from the college archive, as well as a first edition of The Hobbit and a signed menu from the Johnson society, both on loan from Andrew Ferguson.We are very grateful to Andrew and Laura Cracknell, the college librarian, for organising the display.

We are also grateful to the book’s publisher HarperCollins for supporting this event and supplying refreshments, and to The Tolkien Society for their support and publicity. 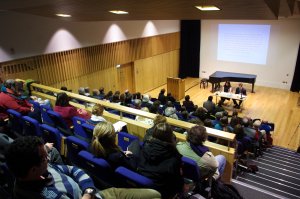 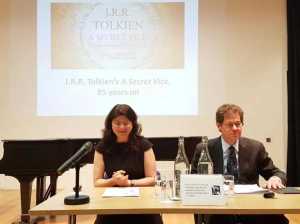 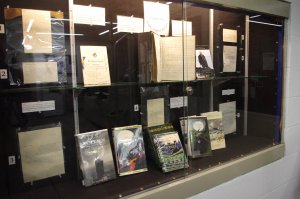 Donations to help fund the lecture series will be gratefully received: