‘Tolkien appears in the fantasy universe in the same way that Mount Fuji appeared in old Japanese prints. Sometimes small, in the distance, and sometimes big and close-to, and sometimes not there at all, and that’s because the artist is standing on Mount Fuji.’
— Terry Pratchett1

From 1925-1945 J.R.R. Tolkien served as the Rawlinson and Bosworth Professor of Anglo-Saxon at Pembroke College, Oxford. During this time he wrote The Hobbit and the majority of The Lord of the Rings.

Since 2013 the students of Pembroke College have organised an annual public lecture in honour of J.R.R. Tolkien. The purpose of the lecture series is to promote speculative fiction — including, but not limited to, the fantasy genre — as literature worthy of study and scrutiny, and to advance our understanding of it by hearing from some of the most influential and talented people working in the field today.

When Tolkien and fellow academic and fantasy writer C.S. Lewis were at Oxford, their important contributions to the fantasy genre were considered embarrassing side projects. As Diana Wynne Jones wrote, ‘the climate of opinion was such that people explained Lewis’s children’s books by saying “It’s his Christianity, you know,” as if the books were the symptom of some disease, while of Tolkien they said he was wasting his time on hobbits when he should have been writing learned articles.’1

Nowadays the climate of opinion has changed. We know that speculative fiction can challenge us to think differently; remind us of fundamental things we had forgotten; connect us to ages past, or a future that may one day become a reality.

We are very grateful to our speakers for taking the time to visit the college and give their thoughts, and for the Pembroke College Annual Fund and Kadas Family Trust for helping to fund the series.

2019: Marlon James, author and academic
‘Our Myths, Our Selves‘

Photos of our past speakers, standing in the spot where Tolkien once stood: 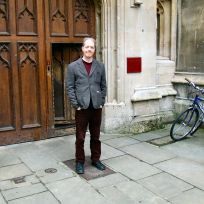 Donations to help fund the lecture series will be gratefully received:

Tolkien Lecture in the News